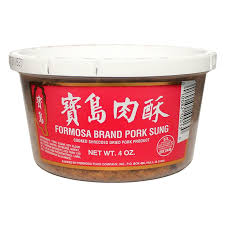 The container of brown fuzz was shoved far under my dorm bed so no one would notice it. But apparently not far enough.

“Why do you have a stash of pork floss?” my friend asked, nonchalantly pointing out the plastic tub with its red and white Chinese label.

““Pork floss”? I was so surprised I forgot to be embarrassed. “I – I’ve never heard anyone call it that. You actually know what it is?”

I had eaten the stuff on a daily basis growing up, but I knew it only as rou song. My family sprinkled the sweet shreds of desiccated meat on our rice, rolled it into homemade sushi, spooned it over Sunday morning congee. We were loyal to the Formosa brand, and the only English name I had ever seen for rou song was the label’s unhelpful translation “pork sung.”

But my friend was a white, beer-loving Eagle Scout from Connecticut. It blew my mind that he had another English term for a Chinese grocery staple, that “pork floss” could possibly be known and enjoyed in both the Chinese and English language.

Mandarin Chinese was my first language. For a short time, it was my only language. I heard English words only for American things, things foreign to my immigrant parents, like football and patios and Pizza Hut.

Then English began to colonize my tongue and mind, lush and inevitable as kudzu. I collected new words, mouthing their shapes silently as I read them on the page, trotting them out in conversation like shiny new toys until my classmates made fun of me for sounding like a dictionary. Anything I used to say in Mandarin I soon expressed far better in English.

But my English vocabulary could only go so far. Where translations failed, a silent border was demarcated between my Chinese and American existence. The line was especially stark when it came to food. It seems laughable now, with the glut of Asian fusion restaurants in every city and trendy food bloggers squabbling over where to find the most authentic xiaolongbao.

That was not the case in the Midwest of the 90s. Fried rice and greasy egg rolls represented most people’s exposure to Chinese food. McDonald’s hamburgers and mashed potatoes inhabited a separate sphere from our dinner table or the Chicago Chinatown grocery stores. Early lunchroom humiliations taught me that Asian foods like cured squid and milk candy in rice paper were “gross.” I petitioned my mom to pack me ham sandwiches and buried any stray alien snacks at the bottom of my backpack.

I would read the English translations on Chinese food packages with a mixture of amusement and disappointment. Some translations tried to approximate Western foods, with confusing results. Flaky cong you bing were billed as “green scallion pancakes” even though they’re savory and don’t play well with maple syrup. Other translations sounded like a list of unappetizing laboratory chemicals. Plump sweet tang yuan bathed in delicate jiu niang were demoted to “glutinous rice balls with sesame paste in fermented rice drink.” Still other attempts were straightforward to a fault. Crispy you tiao were bluntly described as “fried dough” – technically accurate, but there’s a reason Dunkin Donuts doesn’t sell anything by that name.

I always had low-grade anxiety about having white friends over for dinner, afraid I would have to try and explain some untranslatable dish on the table. Without the right English words, how could I hope to convince them that Chinese food tasted good? How could I explain that egg tarts and lion’s head meatballs gave me the same comfort as  chocolate chip cookies and grilled cheese sandwiches?

I was still marveling over the words “pork floss” as I crossed the quad later.

I recalled countless mornings at the breakfast table, copying my dad as he spread grape jelly on a slice of wheat bread and sprinkled it with spoonfuls of thready brown rou song. The sandwiches were satisfying and simple, the sweetness of the jelly mingling with the savory heft of pork in each bite, the crispy-fuzzy texture of the rou song between soft bread.

“Pork floss” wasn’t necessarily a better translation than the clumsy attempts that had dismayed me in the past. But it turned a key in my head to hear a Chinese food named in English, as if it was no more peculiar than a box of granola bars or pretzels.

I thought about the long list of foods without easy English names, foods I had always thought of as strictly Chinese. The leftovers Tupperwared in our fridge, the dishes crowding tables at church potlucks, the smushed packets of dried seaweed at the bottom of my backpack. All the things I didn’t eat in front of “real” Americans. I felt hungry, and a little sad.

Since the discovery of pork floss, I have reclaimed other things I once relegated to the Chinese-only part of my mind. At Chinese restaurants or in the aisles of Asian supermarkets, I delight in finding English terms for foods from my childhood. I no longer mind that the translations are sometimes awkward or confusing. I dig up food histories and descriptions on Wikipedia to find surprising tidbits about familiar dishes.

I’ve learned that shanzhapian, small sweet coins of red candy wrapped in paper, were called “haw flakes” because they are made from Chinese hawthorn berries. I had always assumed that mian jing, a chewy condiment for congee, was just poorly translated to “fried gluten,” but it turns out it really is made from wheat gluten to imitate meat. The fried nuggets my mom referred to only as tian bu la are in fact fish cakes (I always thought they were meat), a Taiwanese riff on tempura.

I didn’t need English words or culinary history to revel in the cool slip of grass jelly on a hot day or the sticky treasure of zongzi unwrapped from bamboo leaves. But my new knowledge salvages what was once neglected, placing forgotten things in the landscape of my Asian-American experience. When I learn new language for old favorites, I taste them as if for the first time.

In the salty-sweet memories of sandwiches at our kitchen table, one mundane detail comes back to me. The Formosa pork floss tub was always placed right next to the jars of Smucker’s and extra-crunchy JIF. Exactly where it belonged.